Shipbuilding is a complex affair, not least because of the huge size and engineering sophistication of the final product. That’s even more true of warships, like Bath Iron Works’ surface combatants. BIW builds the most advanced warships in the world, and the company has made huge strides in the efficiency, cost-effectiveness and precision of its methods in the past decade or so. Here we’ll give you a high-level overview of what we do, and why. 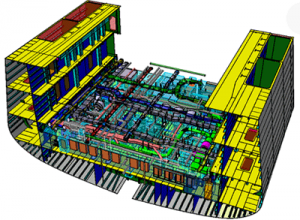 We’ve been leaders in naval shipbuilding for more than 100 years, and that’s right where we intend to stay. BIW is the premier shipyard for building surface combatants in the United States.

We’ve made huge changes in our construction methods in the past decade. With them have come revolutionary changes in our engineering and design. We are constantly incorporating new technologies into our processes, for example, lightweight CAD models accessible on shipyard mobile devices; augmented reality for installation, accuracy and quality control; Light Detecting And Ranging (LiDAR) and 360 imaging to capture existing ships’ conditions; and additive manufacturing (3D printing) of lightweight mocks, prototypes and training aids.

We employ bright and motivated designers and engineers led by seasoned professionals. BIW is not just a shipyard; it’s also the largest design and engineering firm north of Boston.

General Dynamics Bath Iron Works operates two major manufacturing work sites in the West Bath-Brunswick area. One is the Structural Fabrication Facility and the other consists of the climate-controlled Consolidated Warehouse and an automated pipe and sheet metal facility which include computer-aided manufacturing capability for steel, pipe and ventilation known as the Outfit Fabrication Facility.

As BIW’s process has become more sophisticated, prefabrication of large and complex units takes place in both locations, prior to transportation by road to the Bath yard. 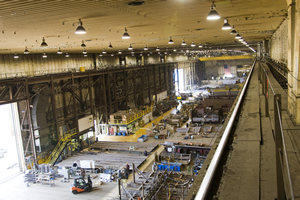 General Dynamics Bath Iron Works shipbuilding takes place at its yard on the Kennebec River, bordering Washington Street at the south end of the city of Bath, Maine. The yard has been in continuous service since the latter end of the 19th century, but has been extensively modernized in recent years. In terms of technology and sophistication, the Bath yard and its neighboring BIW manufacturing locations comprise one of the most advanced manufacturing facilities in the United States.

Facilities at the main plant include a 750-foot dry dock, three shipways, three wharves, an outfitting pier, four level-luffing cranes, and covered facilities for pre-outfit and assembly. Also located within the facilities in Maine are engineering, design, ship support, and administrative offices. The shipyard has two principal structural assembly buildings. The larger building measures 15,600 square meters of interior area and houses the Panel Line and 15 Unit Assembly workstations. The smaller building encloses 3,780 square meters and 7 workstations. The Pre-Outfit Building (8,450 square meters) has 16 workstations and is used for installation of distributive systems and operating machinery after the structural units are grit-blasted and painted.

Into the Open: On the Shipways

The shipyard has two separate facility configurations that support the ship assembly (unit erection) and launching process. Both configurations consist of three shipways that can be used for either military or commercial ship construction. Three level-land shipways are the centerpiece of the Land Level Transfer Facility (LLTF); all three shipways can accommodate ships of 243 meters in length and a maximum beam of 32 meters. The LLTF building positions are serviced by two, track-mounted, 300-ton level-luffing cranes and one, track-mounted, 100-ton level-luffing crane. Operating on an inter-connected rail system grid, all three cranes can be positioned to service any of the three shipways.

Each ship under construction is paired with operational service towers (OSTs) that permit entry at various intermediate levels on the hull up to deck height, and are equipped with tool cribs, offices, lunchrooms, a freight elevator and other features designed to obviate the need for moving off the job. When ready for launching, ships are translated onto a 28,000-ton lift-capacity floating dry dock, using a purpose-built TTS electro-hydraulic transfer system. Outfit Piers #3 and #4, which are adjacent to the LLTF, are serviced by track-mounted live-boom cranes; one 90-ton and one 60-ton. In addition to the Land Level Transfer Facility , the shipyard has an outdoor fabrication zone for deckhouses, serviced by a 220-metric ton, track-mounted, level-luffing crane. 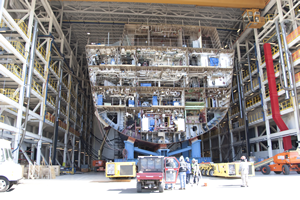 The 77,000 square foot Ultrahall opened in February 2008. Here, because of the greater headroom, we can assemble entire keel-to-weather deck sections of ships. This will mean units weighing up to 4,000 tons can be outfitted in controlled climate conditions. The Ultrahall has been in constant use, housing upsized ‘ultrahull’ units for the Arleigh Burke class destroyers.

All of this work can happen, of course, because the process is fed at every stage by purchasing and procurement staff, by liaison with the hundreds of sub-contractors whose equipment is specified for the ship, and through extensive collaboration with the Navy customer.